Howdy, Friends!!  Welcome back to another episode of What’s Up, Wednesday!!  Today I’m linking up with Sheaffer and Shay to let you know what we’ve been up to!!

I’m just gonna call this the Memorial Day Edition of What’s Up, Wednesday, because it was SO FUN and we made so many memories!!

We spent Memorial Day at our house in central Wisconsin. We invited our kiddoes & their families to join us. Some went up as early as Thursday to get away and CHILL a little longer!  I was bummed because not every one could come up, but they were with us in spirit, I just know it!!

I drove up with my trusty guard dog, Minnie, on Saturday. It was a sunny and beautiful day to drive!  I listened to a few podcasts and before I knew it, I was there!!

After a nap and some lunch, this busy little guy (our grandson) was ready to hit the Splash Pad for the first time!  He wasn’t quite sure what to think of it….he had plenty of sunscreen and encouragers there to watch.  The water was super cold, so I would say he wasn’t a fan this time, but when it gets warmer outside, I’m sure he’ll love it!! He liked the playground MUCH better….swings and steps and slides, OH MY!!! 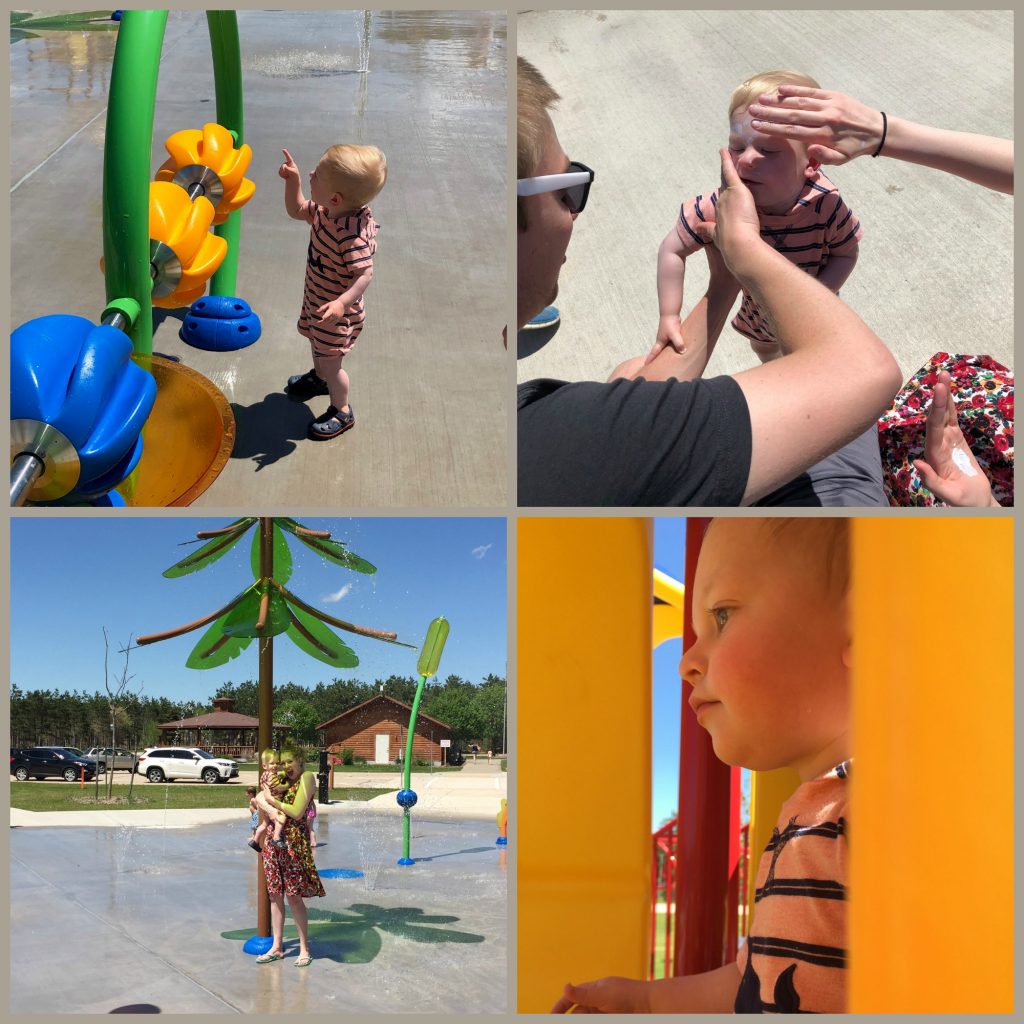 We worked so hard that we ALL needed some ice cream!  We stopped at a place right across the street- the ice cream was REFRESHING!! 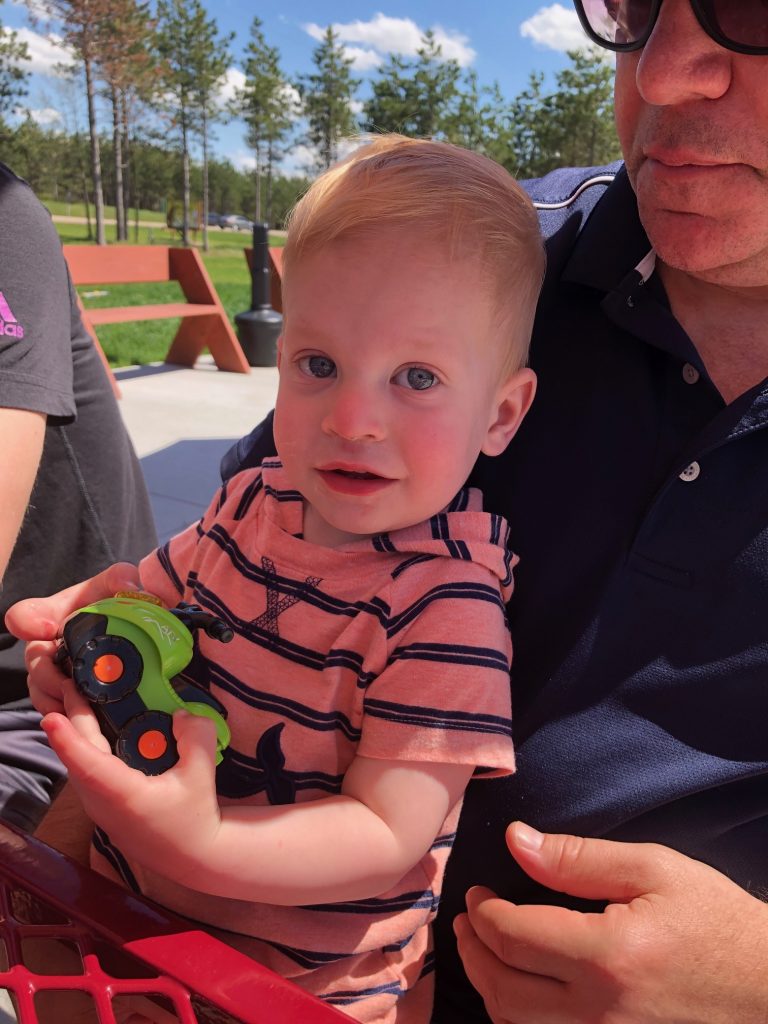 His Mommy was challenged to win a ball from the CLAW machine in the snack shack, AND SHE WON IT!!

We now have that orange basketball in the front at our house!! 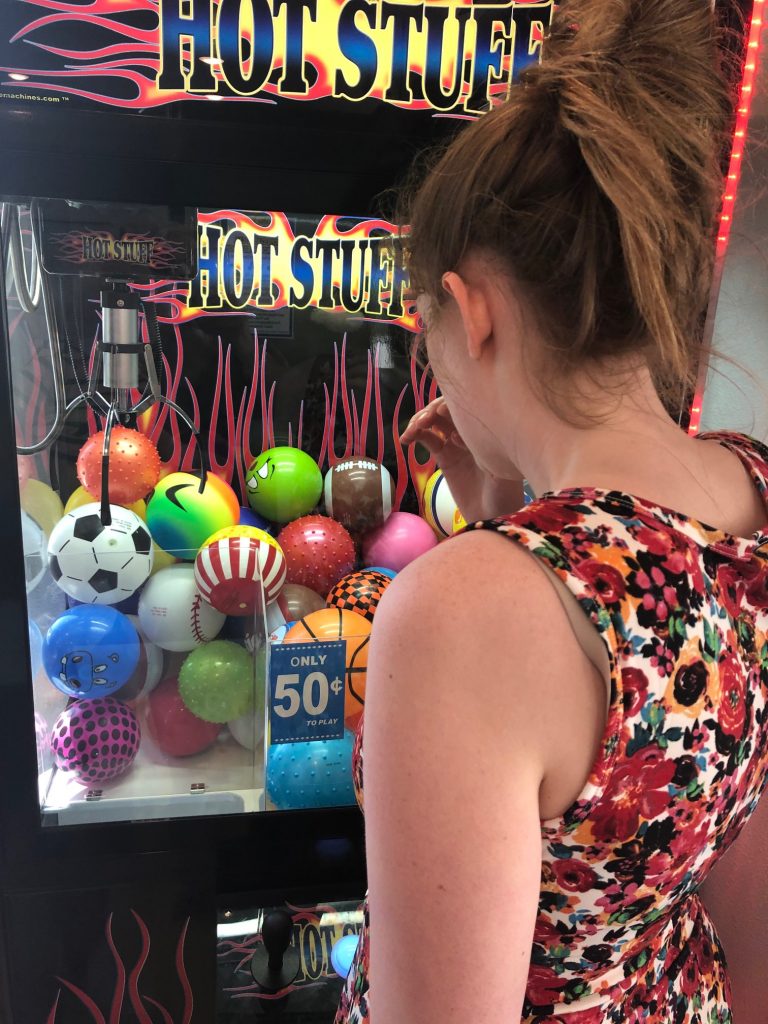 Since we had three couples up at our cottage, we each took a night of cooking. Son #1 and his wife made homemade pizza on Friday night!! Sorry, no pics- but they said it was DELICIOUS!!

Steaks, corn on the cob and grilled potato and onions!! 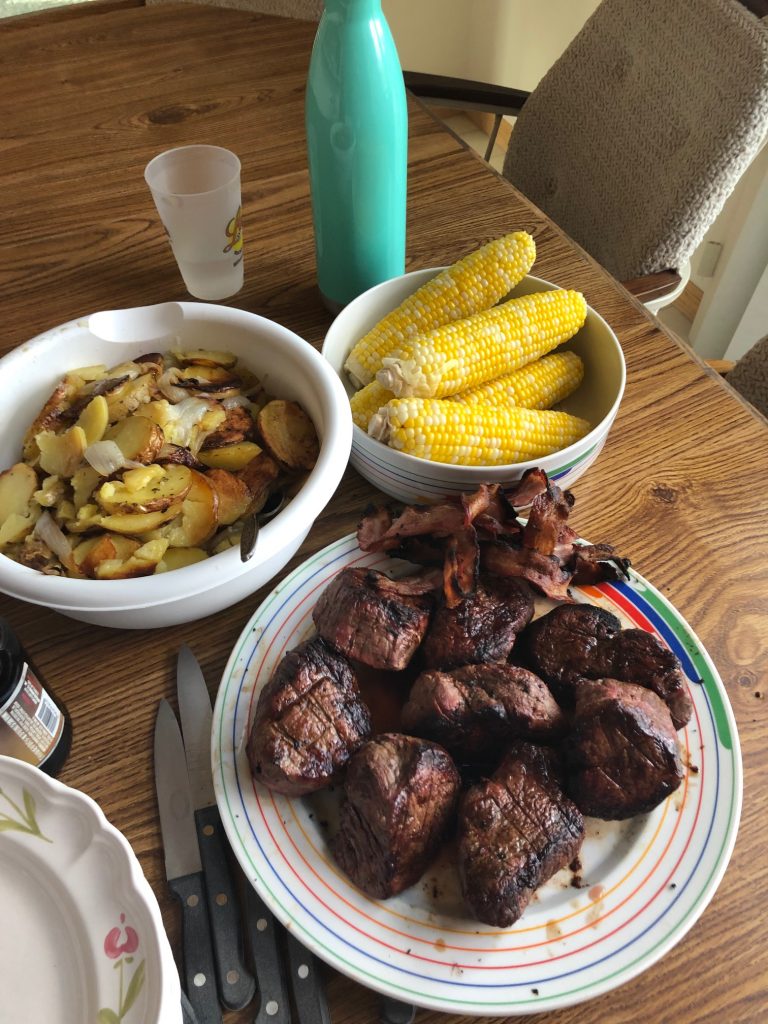 It was a beautiful night on the deck!! 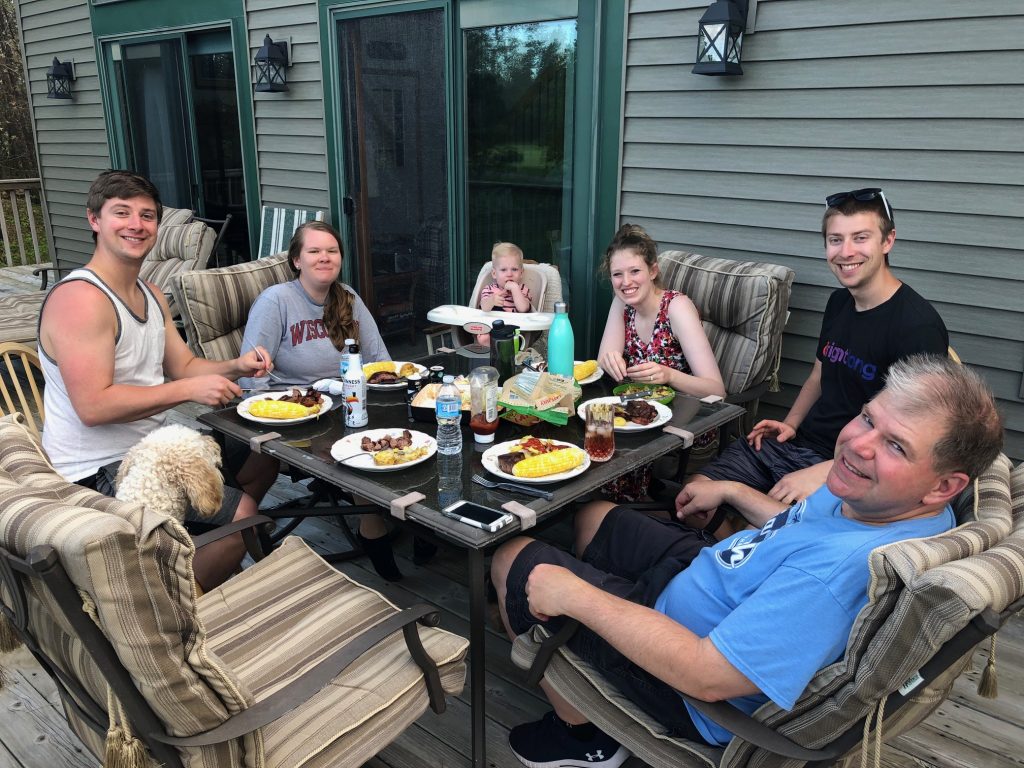 That night we settled in and watched the Milwaukee Bucks lose their last game! BOO!!  Honey didn’t watch the game, she was SNOOZING!!! 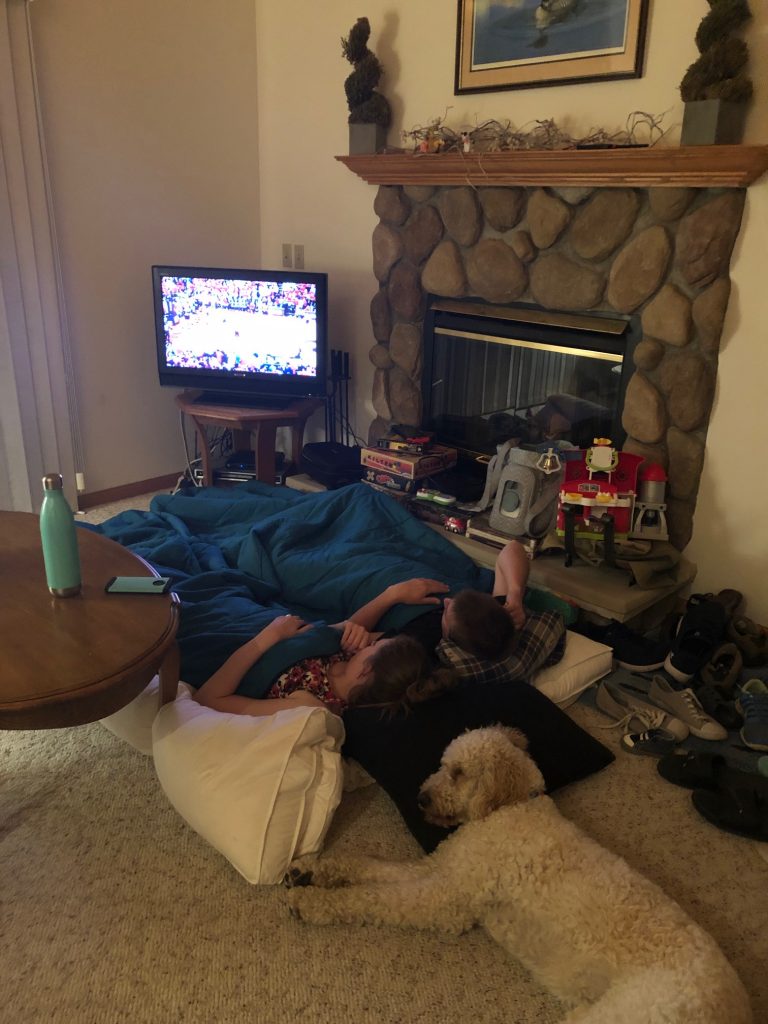 Sunday morning came and Little man tried his first powdered donut!  We call them “Chalet donuts.”  The verdict was a big thumbs UP! 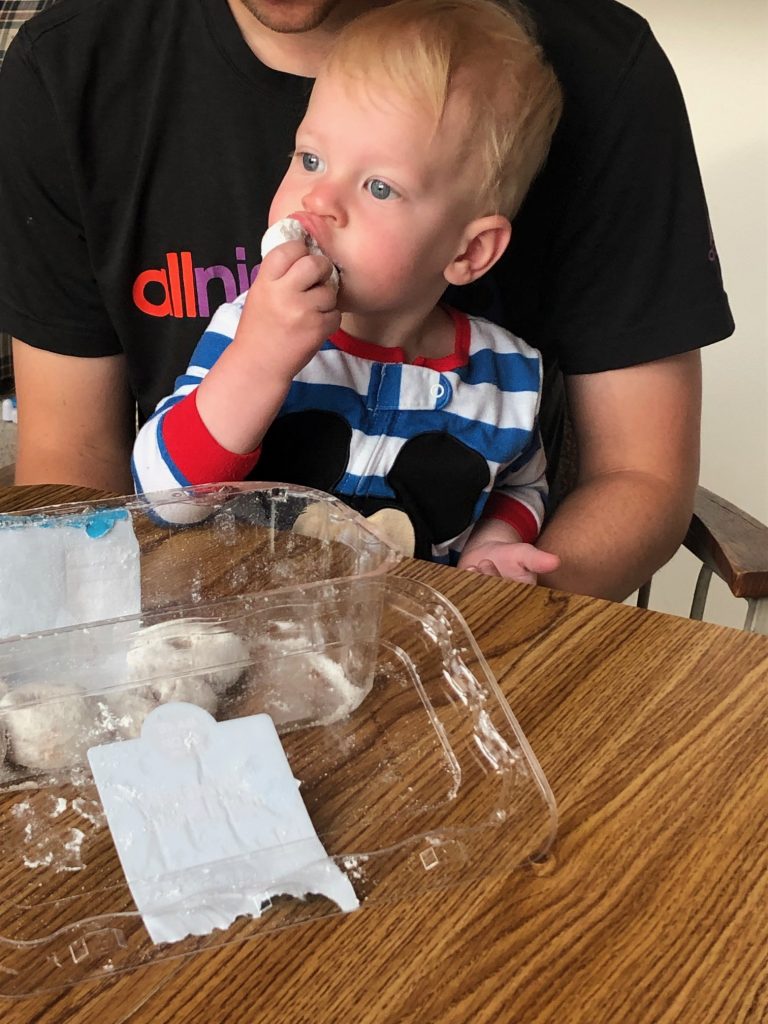 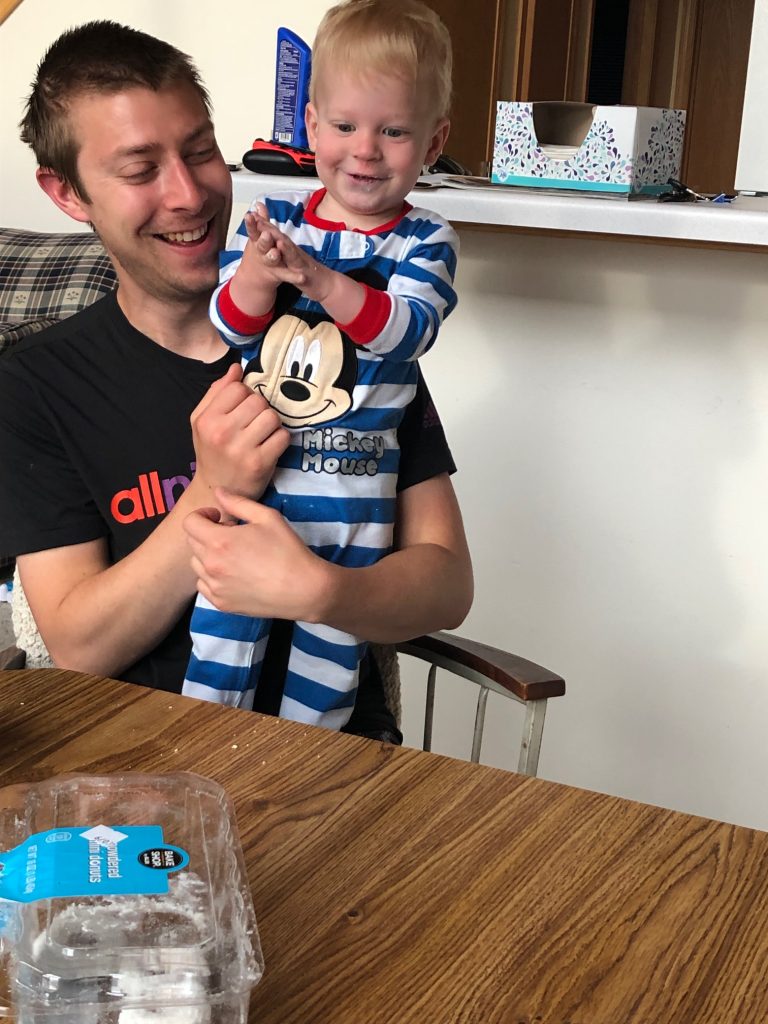 Some of the guys got out and hit the golf course! It was a beautiful day for golf!! 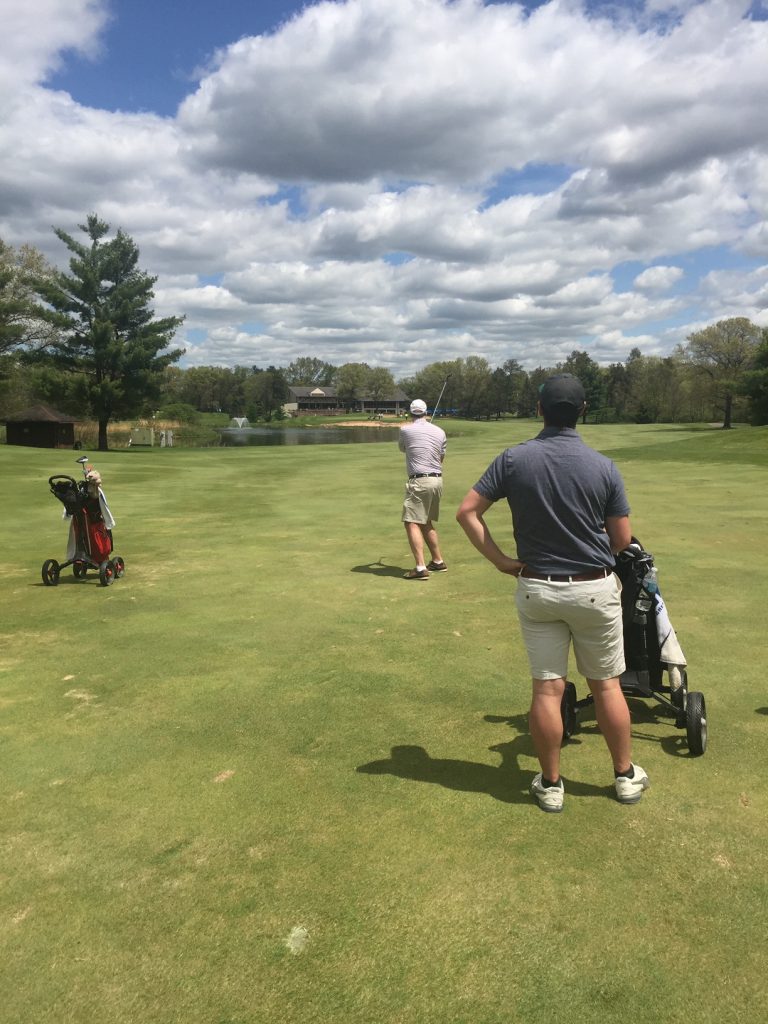 Sunday afternoon was pretty CHILL….lots of napping and relaxing!  This guy was ready for the sunshine! 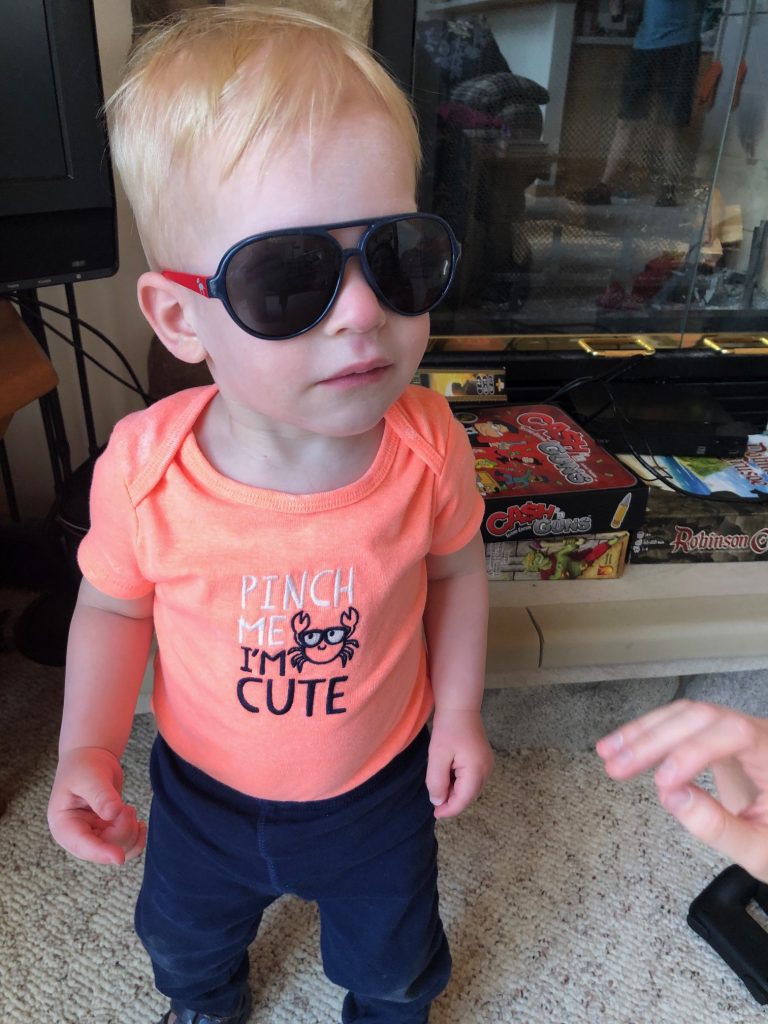 Sunday night, it was Son #2 and his wife’s night to cook!  They made baked sandwiches, broccoli salad and had chips on the side! 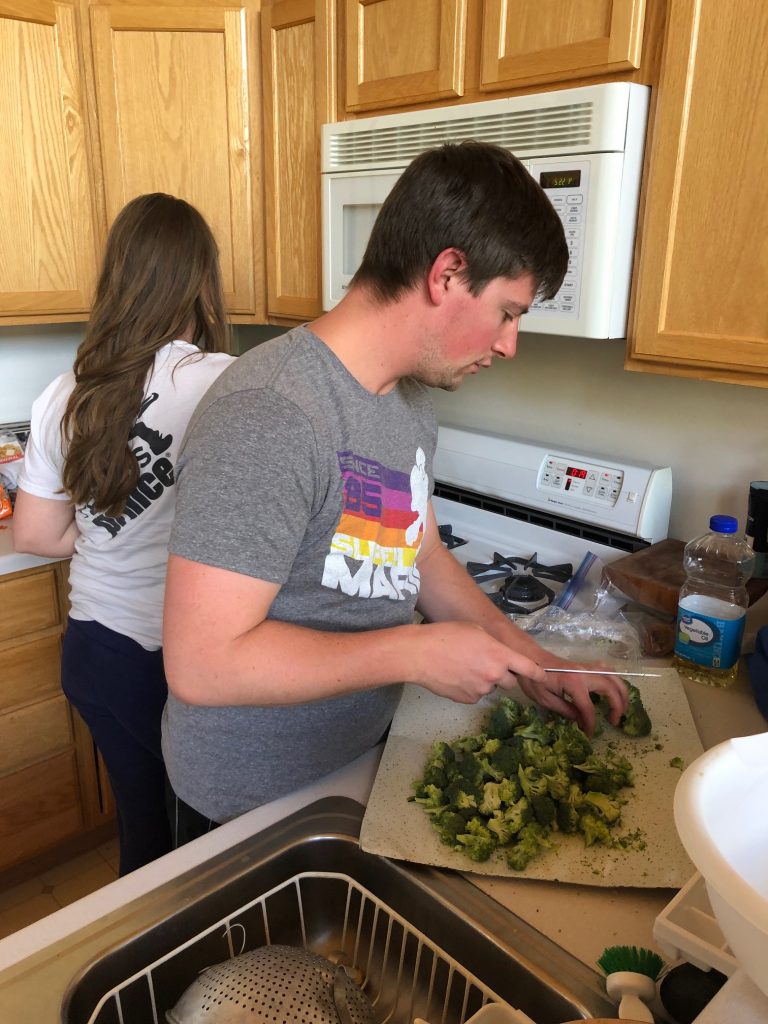 I bet you worry about us starving to death up north, right??  Well, DON’T!  😉 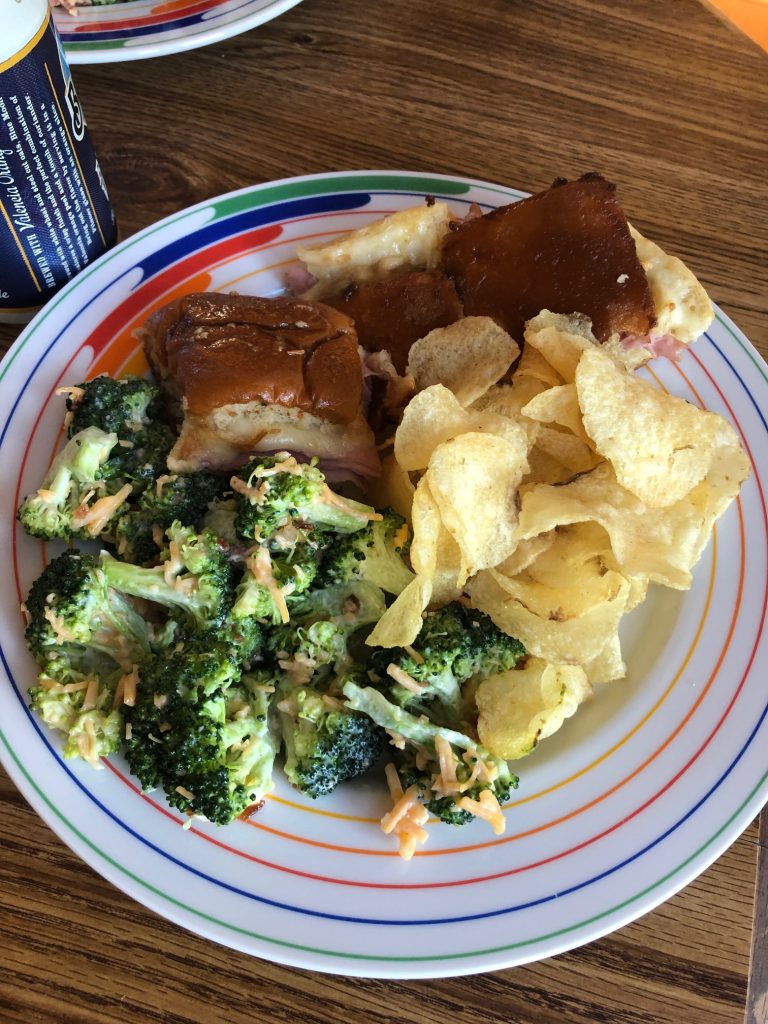 After dinner, we had a vicious card game of GOLF going… 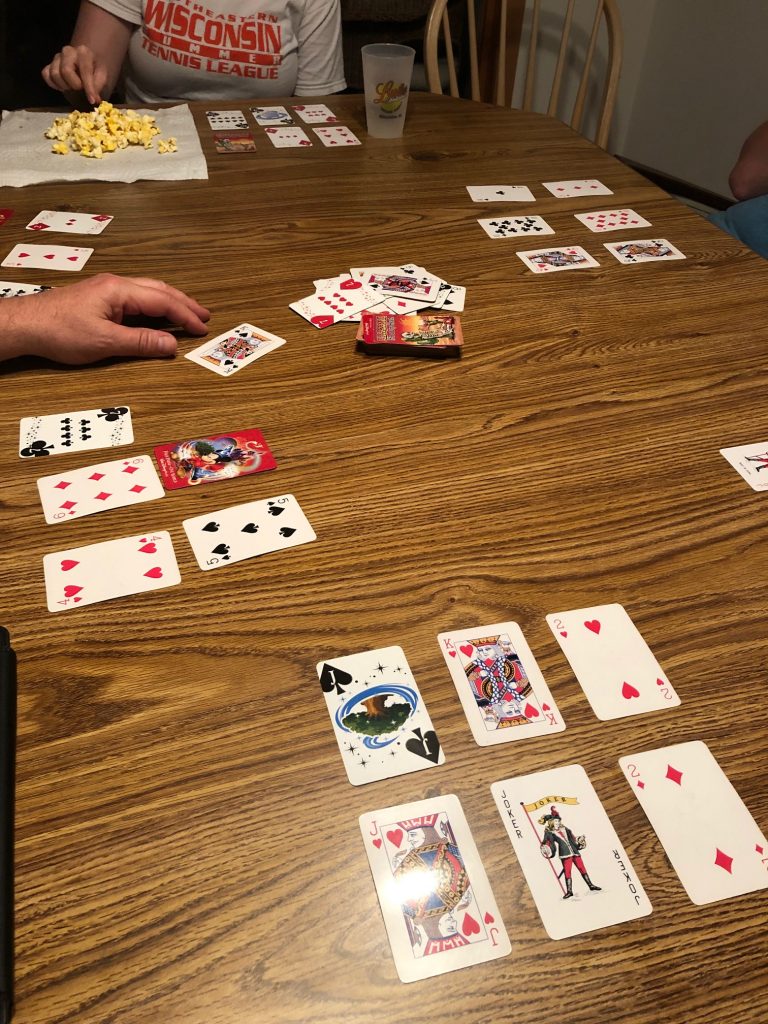 Plenty of laughs with these two jokesters around!! 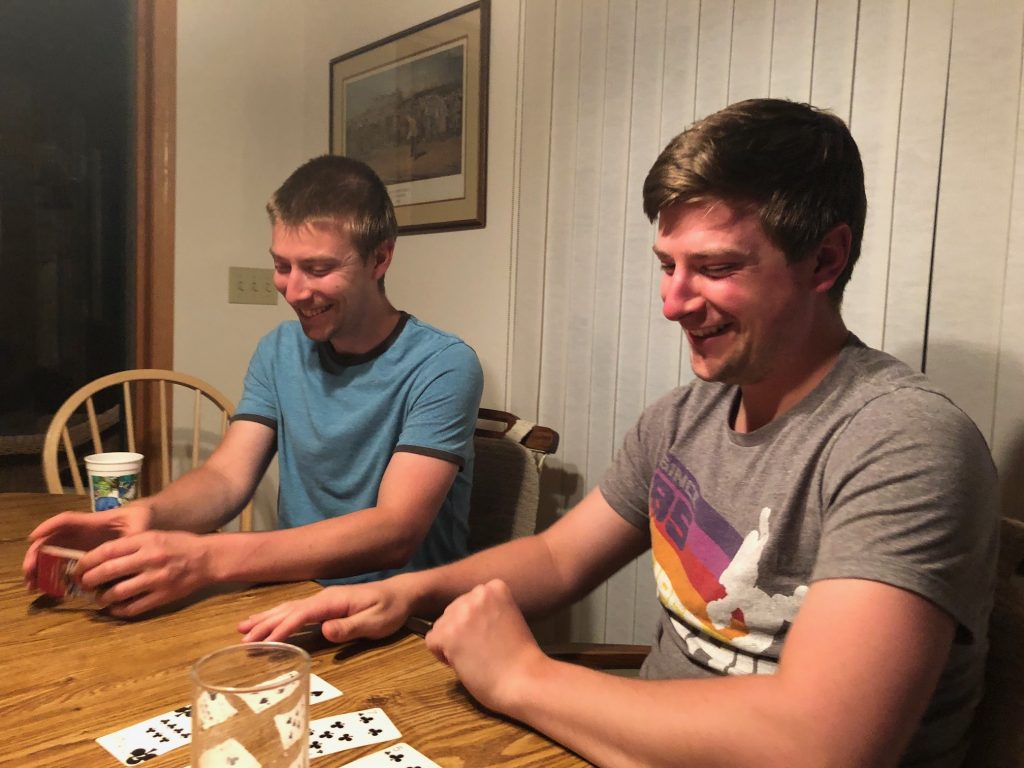 Because we had so much fresh air, entertainment, good food AND the fact that we are PARTY ANIMALS, most of us were in bed by 10:30.  Woo Hoo!!

Monday morning brought one last project.  In the Summer, the sun comes blazing in thru those top windows and blinds people when they walk out of their dark bedroom.  We decided to fix that.  Hubby bought some kind of film to adhere to the windows to block the huge glare from the sun! He had plenty of help…especially from the dog. 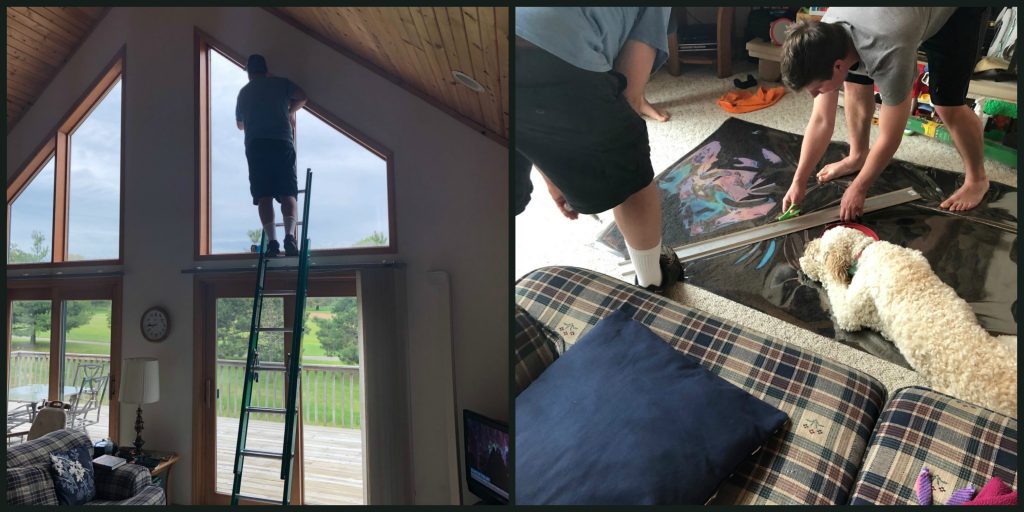 As the family said goodbye later in the day, I snapped one last picture…..

Hated to see them all leave, but I will cherish the memories of a Fantastic Weekend!! 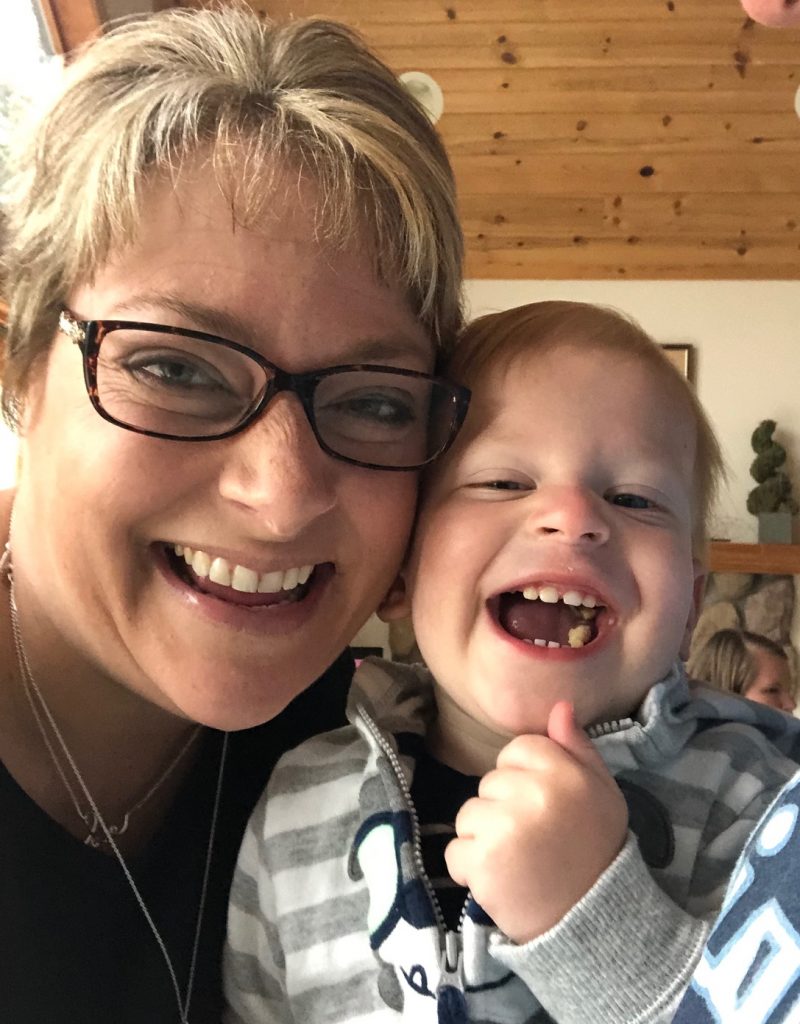 See ya next time!! xoxo 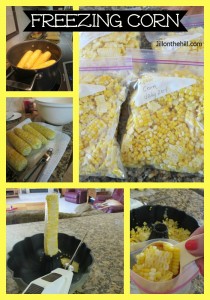 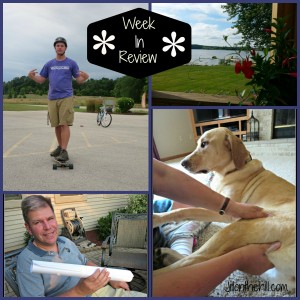 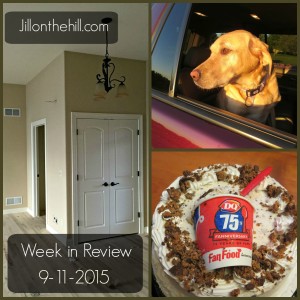 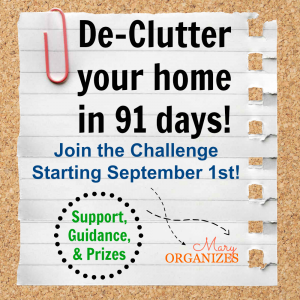