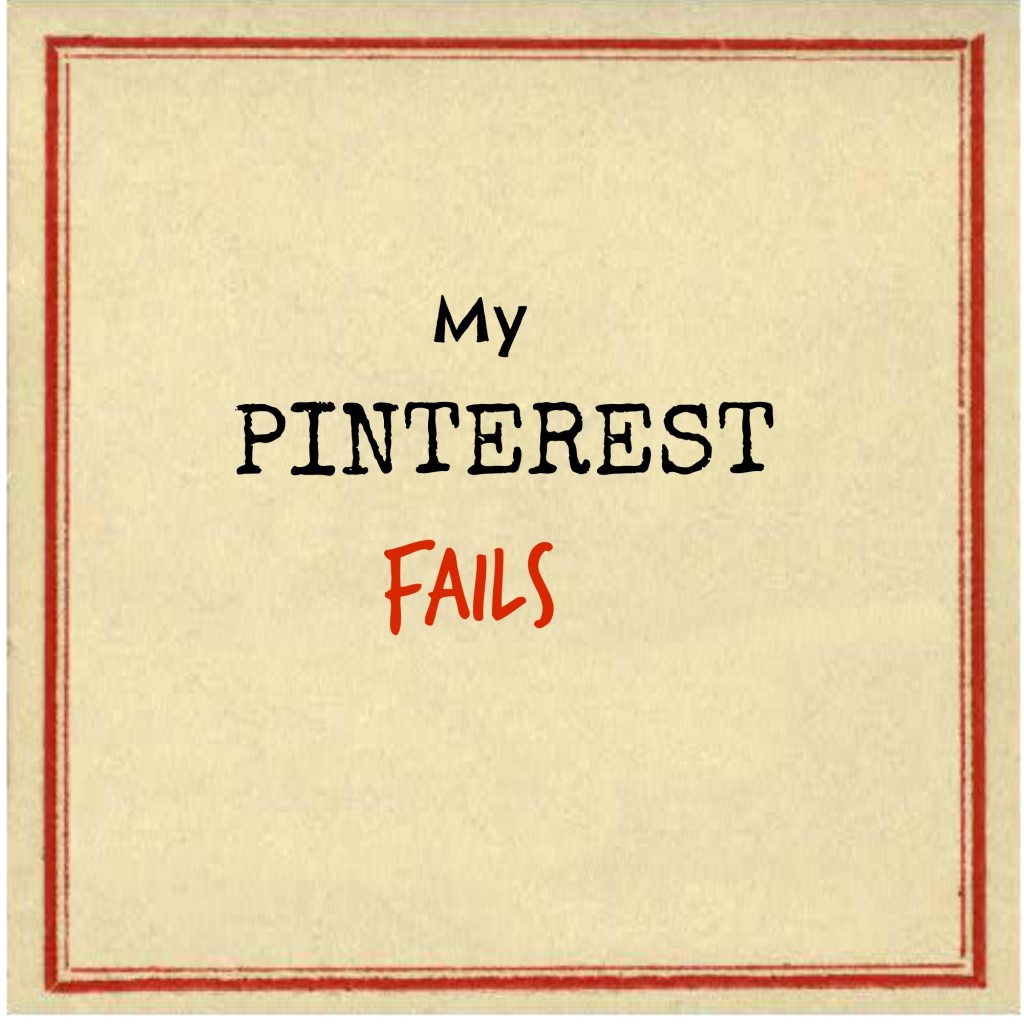 I like Pinterest, I really do!  I’ve gotten so many great recipes, home decorating ideas and quotes from Pinterest- too many to count!  I have had a few “fails” too.  Today I’m shouting from the roof top, loudly and proudly, my FAILURES! 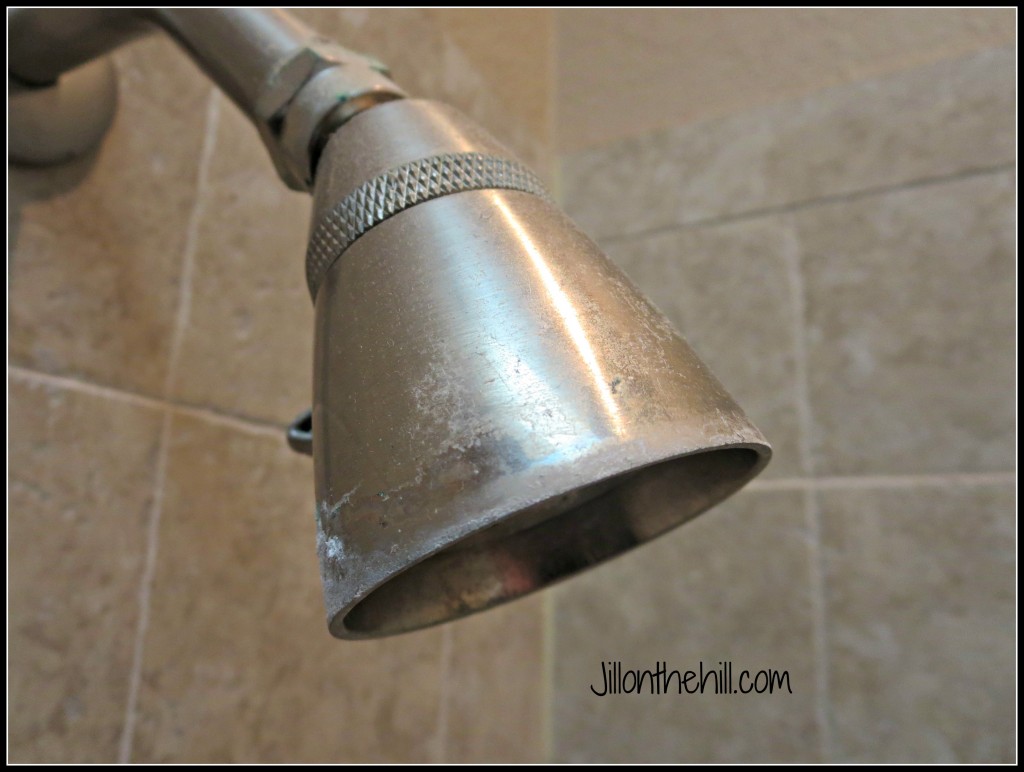 Here’s another view….can you see the lime and calcium deposits? Yuck! 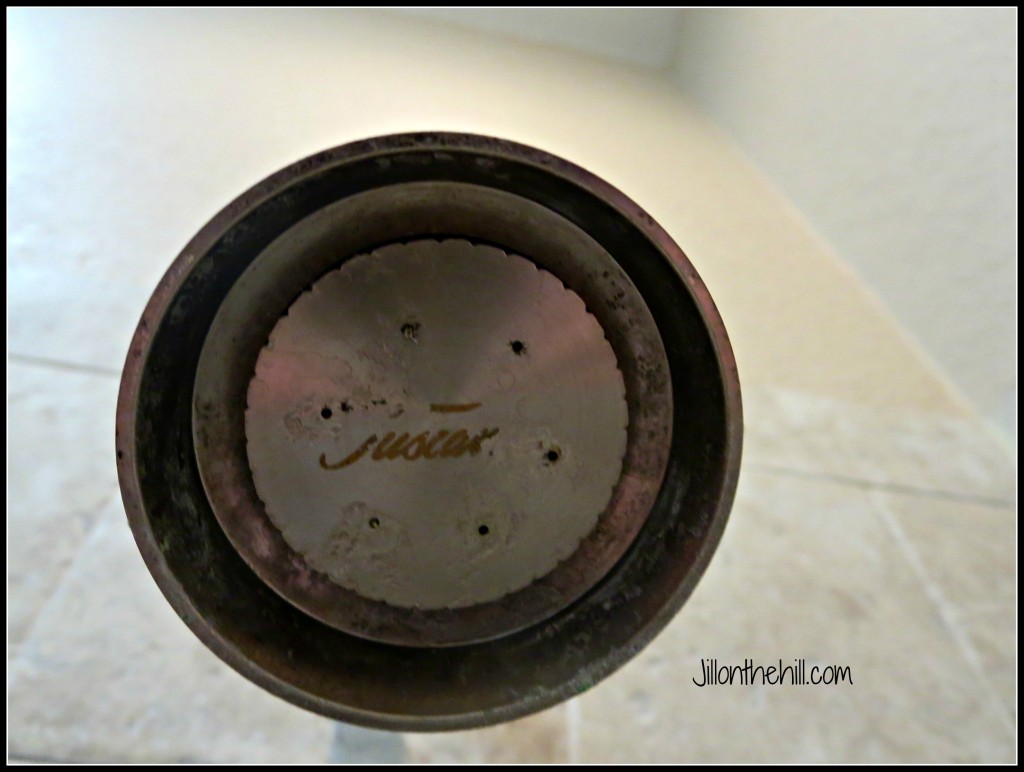 Because I’m always looking for a more “Green” way to clean things, I looked on Pinterest to find a solution to my problem without using harsh chemicals.  I found a post that said to fill up a baggie with vinegar, use a twist tie to secure the baggie around the shower head and let it sit for 1 hour.  It would dissolve the lime and calcium….yee haw, I had found an answer and I was even taking pictures of my process to “share” the idea with all of you.

Here’s the baggie, securely fastened around the shower head just cleaning away! 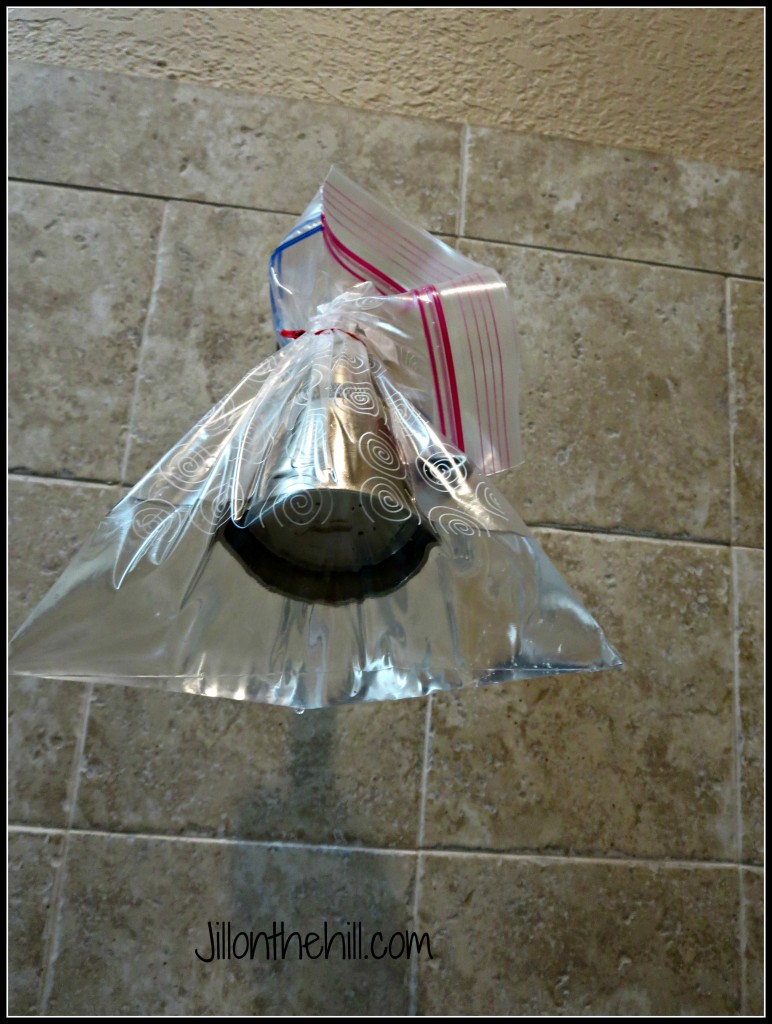 Because it was SO DIRTY and gross, I decided to leave it on for a little longer.

and then forgot about it.

The next day, as I was wiping down the bathroom I remembered that the vinegar was still cleaning the shower head.  I thought “It must be REALLY CLEAN by now!”

Um, yeah.  The vinegar pretty much took all of the finish off of the shower head-  OOOPS! 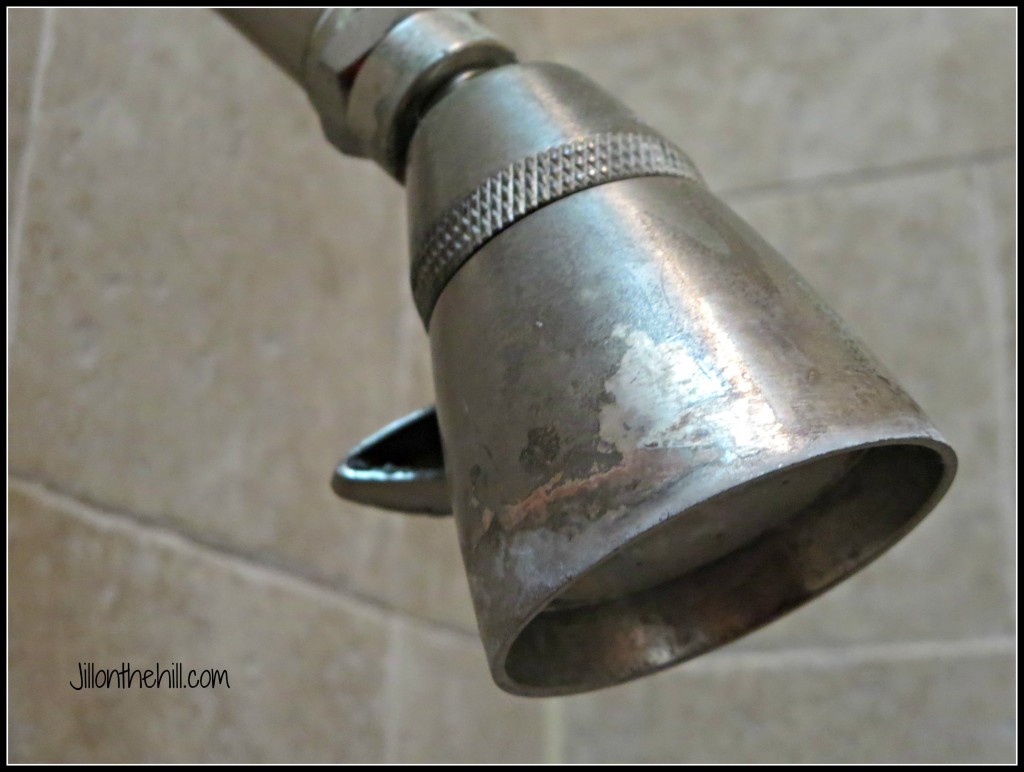 and it didn’t even get the inside clean…sadface.  I suggest if you try this, leave it on for 1 HOUR!!  I FAILED! 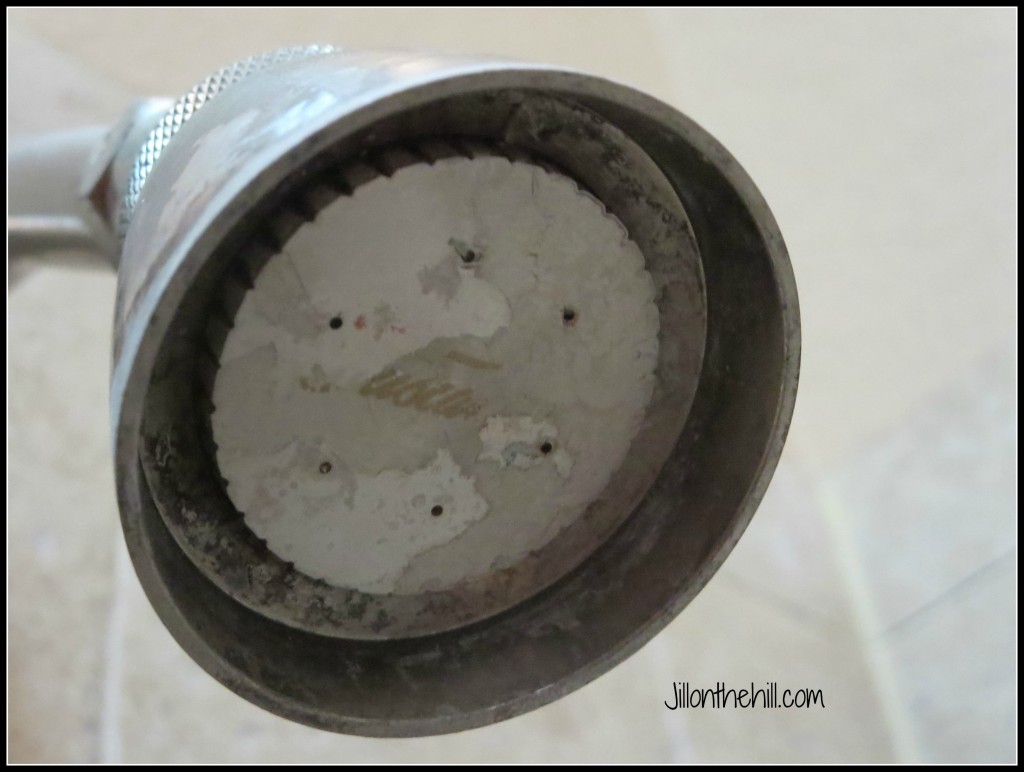 Here’s the beautiful picture of the new recipe that I was going to try.  Isn’t it lovely?? The recipe was very easy too.  You mixed a few ingredients together, poured it over the pork and then baked it. This recipe boasted that this was an easy and beautiful dish to make for the Holidays or for company coming over.  I thought it looked fun, so I gave it a try! 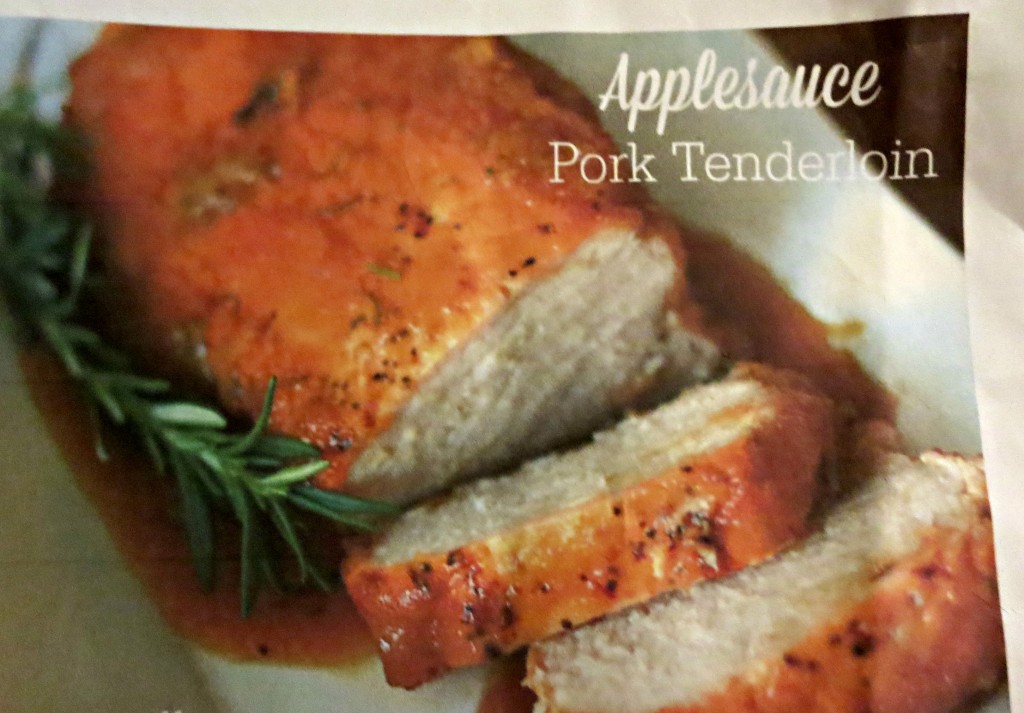 Good Thing I didn’t serve it to company OR over the holidays.  I’m not sure what I did wrong, but here’s how it turned out. Not so pretty. Maybe it’s because I forgot the sprig of rosemary. 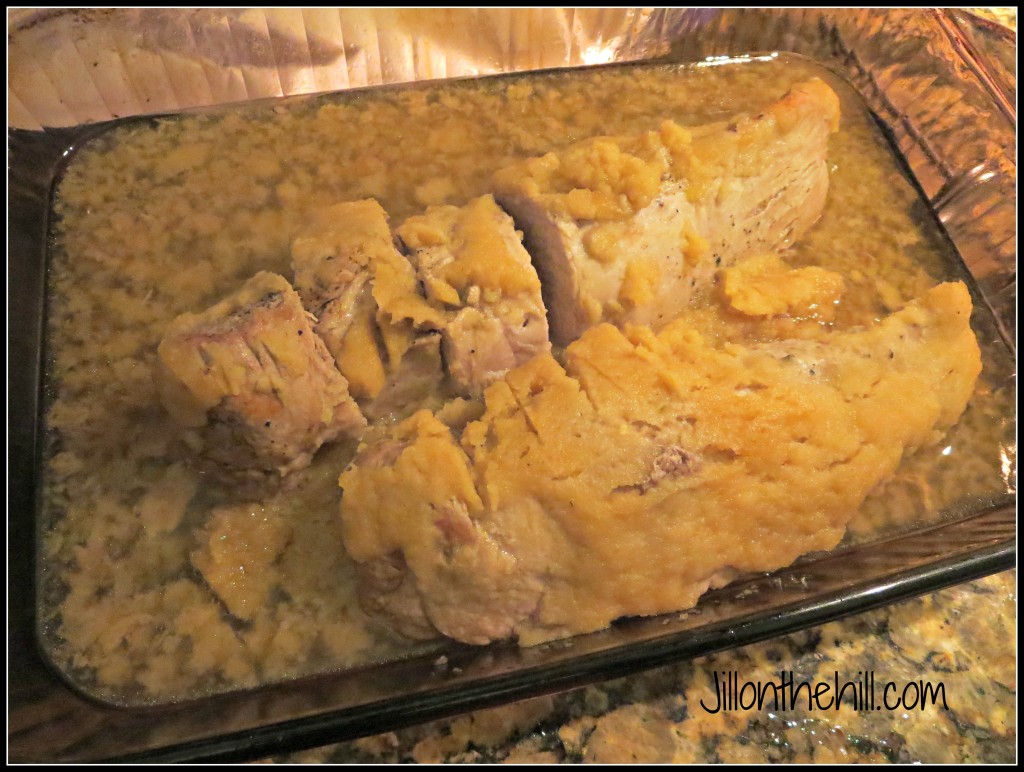 I can hear it now….”Could you please pass the dog barf covered pork?”  Bless their hearts, my family ate it- without gagging either! I guess ketchup can cure almost anything!

My Mom makes the best strawberry jam.  THE BEST!  I should have known better than to deviate from her recipe.  Her recipe is flavorful, sweet and with just the right consistency.  Once again, I looked to Pinterest to show me an EASY way to make jam.  Here was the end result.  RUNNY, RUNNY, RUNNY! 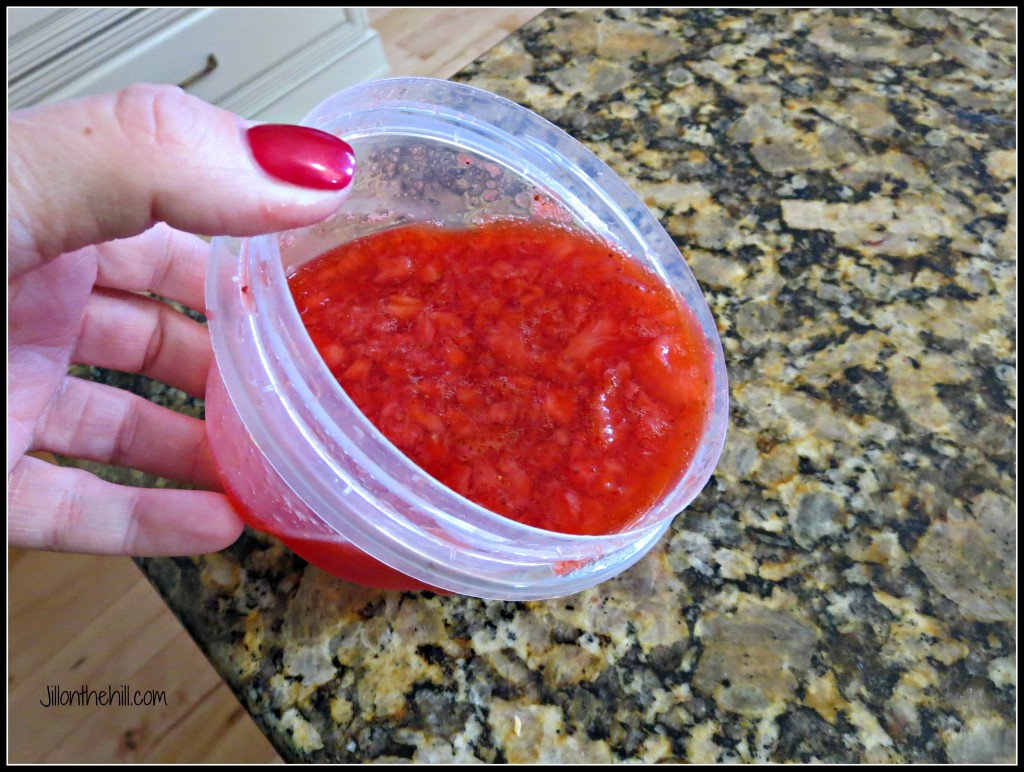 The bad news…..I made a BIG batch (at least 4 of these containers) of this useless jam that is now sitting in my freezer.

The good news….. it makes a great ice cream topping!!

Last year I was coaching a cheer leading squad at Sweet Pea’s school and we had practice right after school.  I thought making these loaves of bread would be the perfect after school treat for the girls.   Um….not sure what happened but, these babies were burned to a crisp. 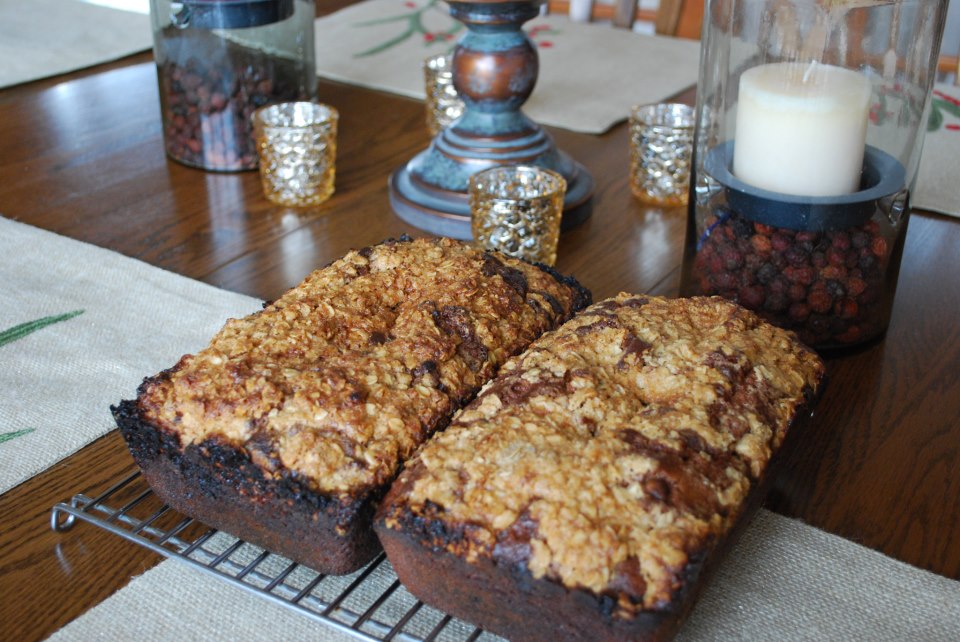 No matter how pretty I tried to make them look, there was no way I could serve these to the cheerleaders! The BAD news was that I had to go to the grocery store and buy another snack. The GOOD news was that I sawed off the ends and served it to my family and they were in hog heaven!!  Don’t you feel sorry for my family??  They are hungry and desperate for food!!  God bless ’em!

In the famous words of Hannah Montana…

Linking up with : Works for me Wednesday 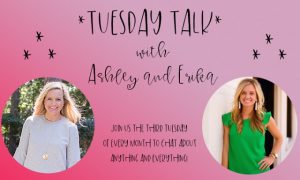 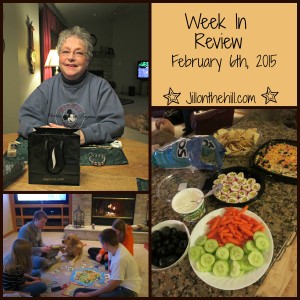 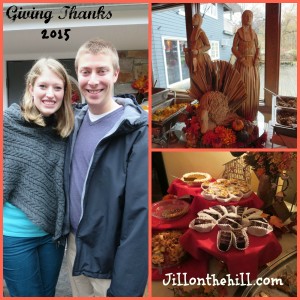 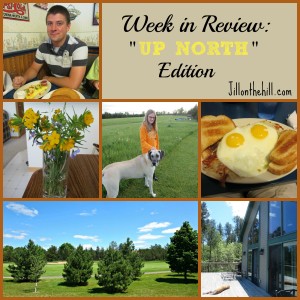 Taking some time to relax & watch a little trash t