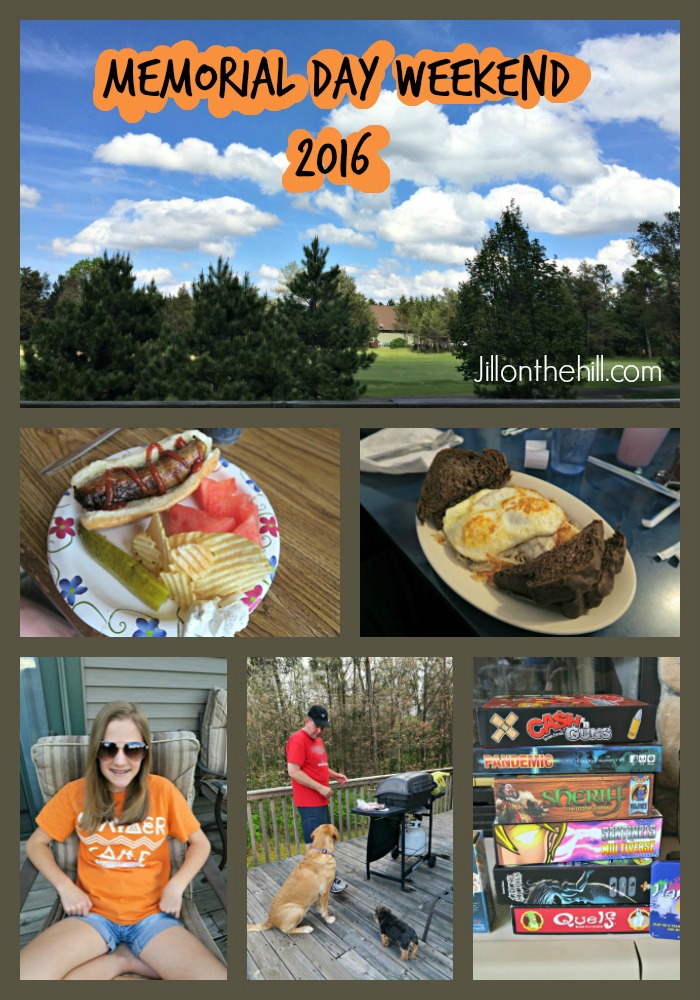 Why is it that I always get Memorial Day and Labor Day mixed up?  Does that happen to anyone else?

Well….Welcome to our Memorial Day, 2016!  Memorial Day usually signifies the start of Summer for us!  When we heard that the weather forecast for the weekend was going to be a rainy one at our cottage, we brought plenty of board games, card games, magazines and books.  The whole gang was able to make the trip, so it was a full house!!

GAMES:  My oldest son and his wife are the King and Queen of board games!  They brought a few from their collection and we brought a few too!  So many choices!! Friday night, the game of Nertz got really intense.  Nertz is like a game of solitaire but everyone playing gets to play off of the aces in the middle!   I’m surprised no one broke a finger or rib trying to get their card onto the right pile at the right time!  Some players may have complained that the players on the ends of the table were at a disadvantage, but after a few rounds, people switched spots! 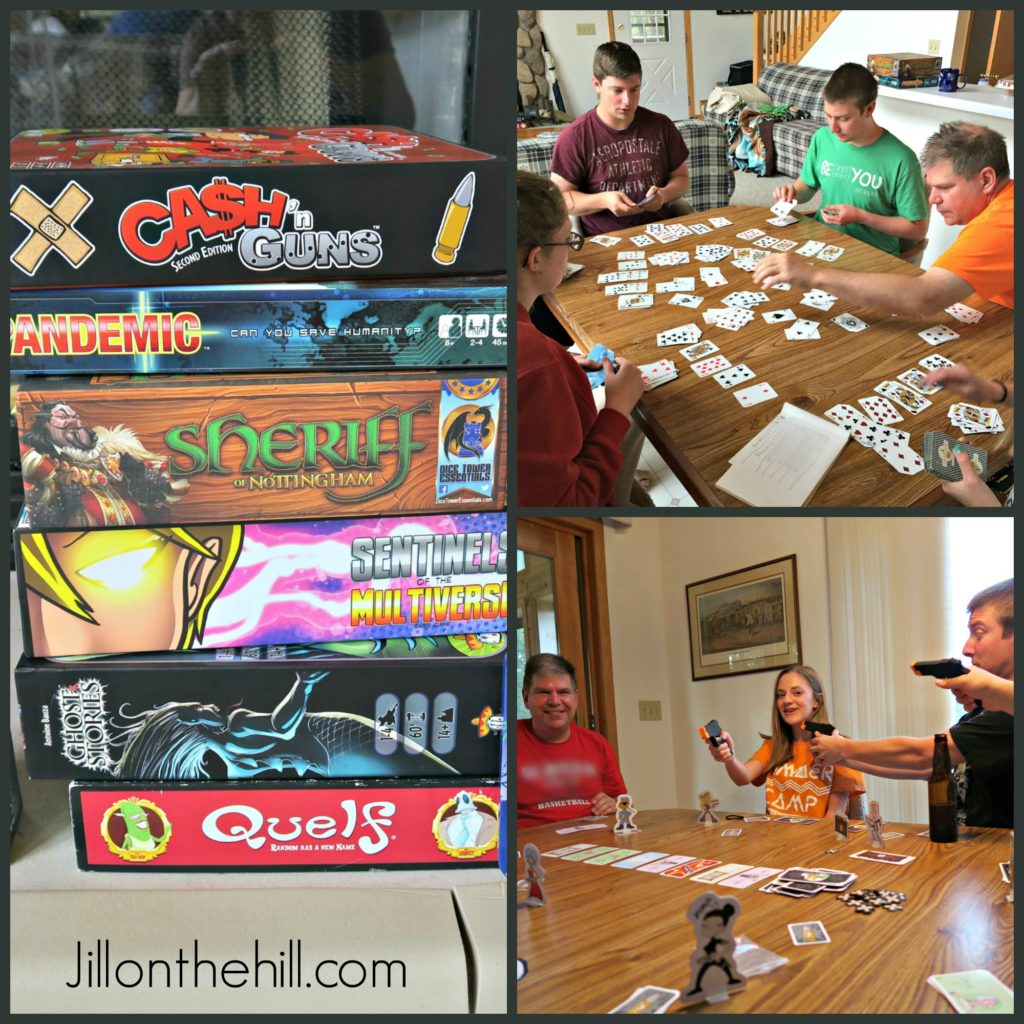 Because the weatherman was wrong, and it didn’t rain much on the weekend, some of the guys went golfing.  My son was THIS CLOSE to getting a hole in one!!  Rats, I wish he would have made it!  He still looks happy though! 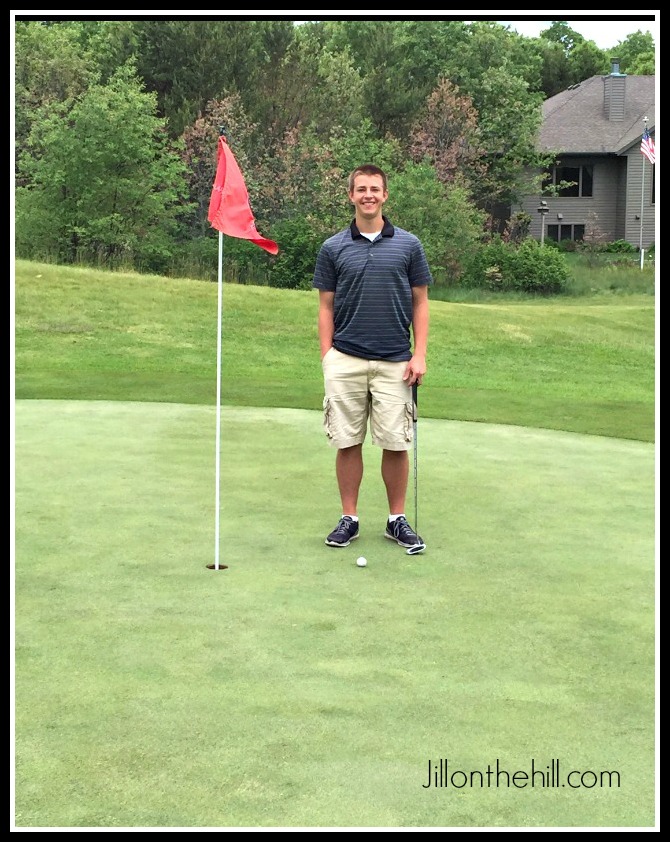 FOOD:  When we’re up north, we declare the weekend a no diet zone!  Now we may throw a salad or some fruit or veggies in, but it’s mostly a plate of unhealthy choices.  Case in point- see pictures below.  We usually grill one night and get chicken at the local convenience store the next.  It’s also a must that we visit our favorite breakfast spot to enjoy a big country breakfast!  The photo on the left is called “the stacker.” Hash browns,  covered in sausage gravy with 2 eggs on top, served your way with a choice of toast! This could make 3 meals for me, but for my boys…..well, they scarfed it down all in one sitting!!  Oh, and excuse the messy kitchen, I also give up my “everything in it’s place” mentality when we’re up north!! 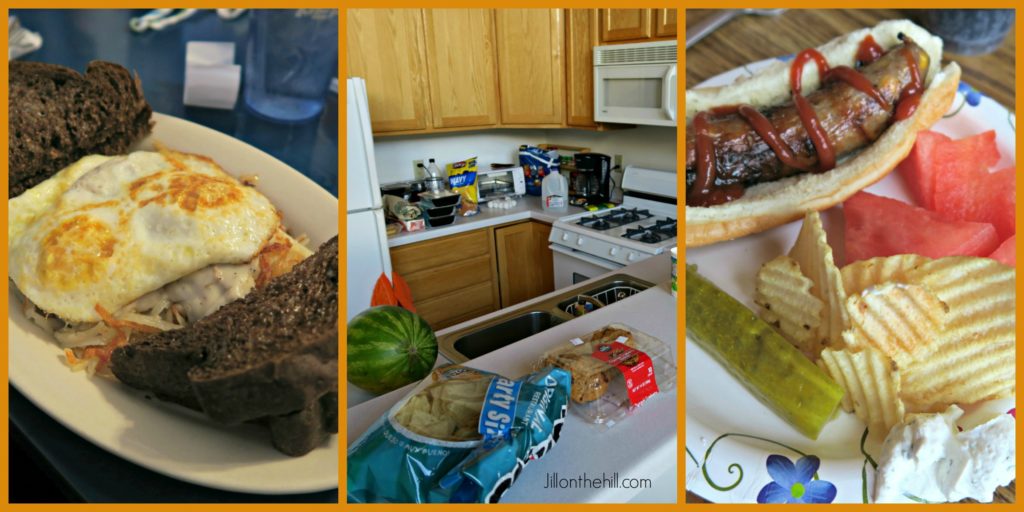 TANNING & RELAXING: Memorial Day is usually the first opportunity to show those winter white legs and bodies and get a little bit of color.  I’m not sure if the boys were that concerned about their tanning, but they sure got warm playing Spike Ball, and had to strip down! What a sight…ugh! Sweet Pea enjoyed her new book on the deck. 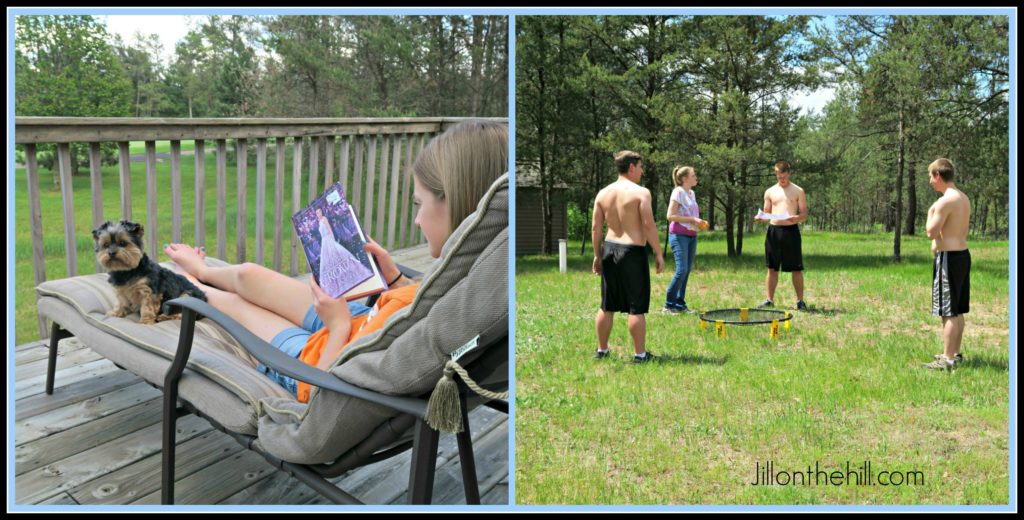 Some unnamed person REALLY needed to work on his tan….such an awkward tan line from the golf season at school! 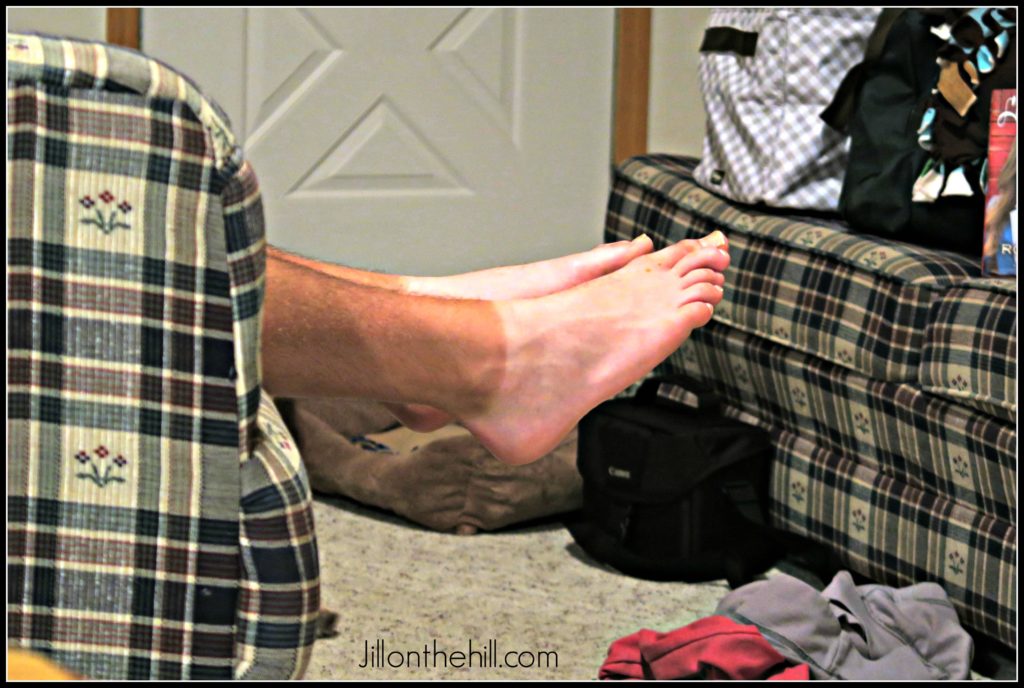 Memorial Day was about being together and enjoying each other- it’s that plain and simple.  We remember those who fought and died for our country, giving us our freedom.  Many families will never be the same because of those losses.  Thank you men and women who have fought and are currently fighting for the good ol’ U.S. of A.! We salute YOU!!! 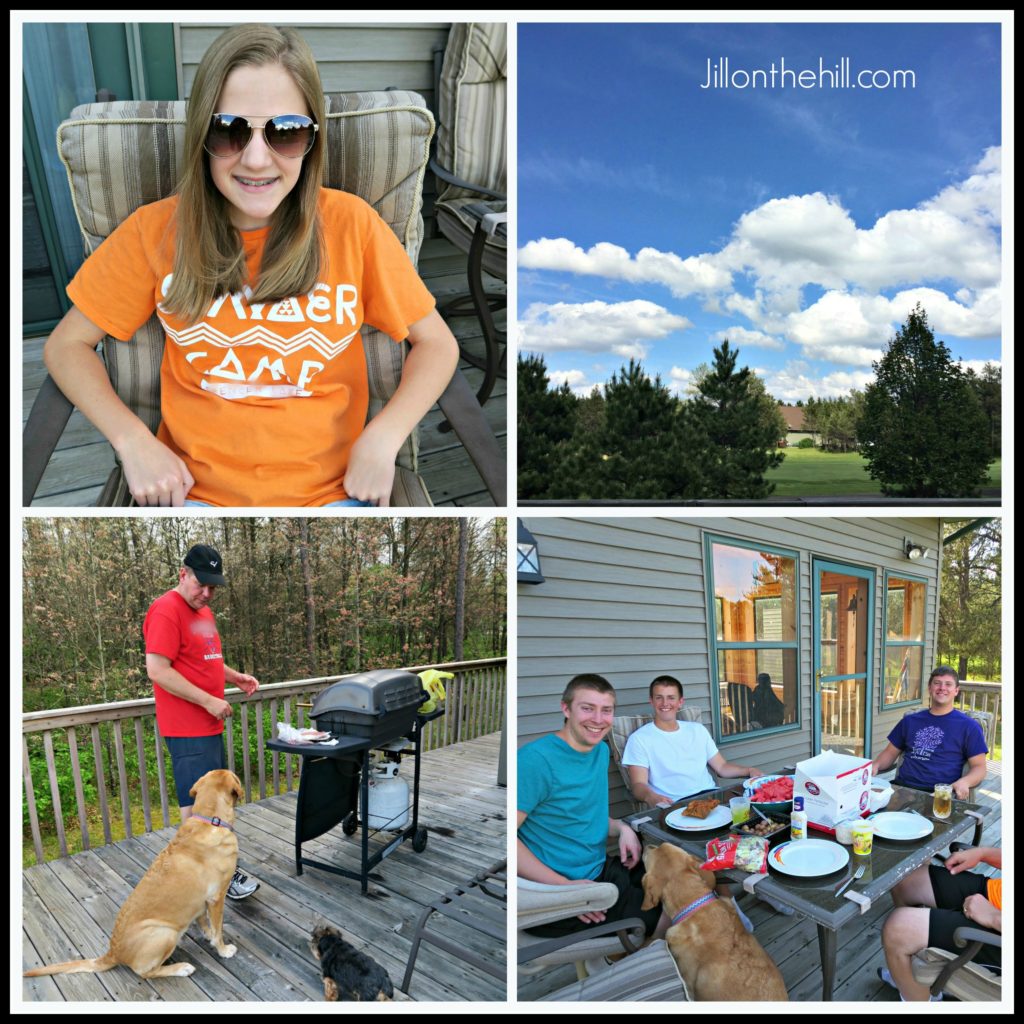 My Crazy Family, and I love them all!!! 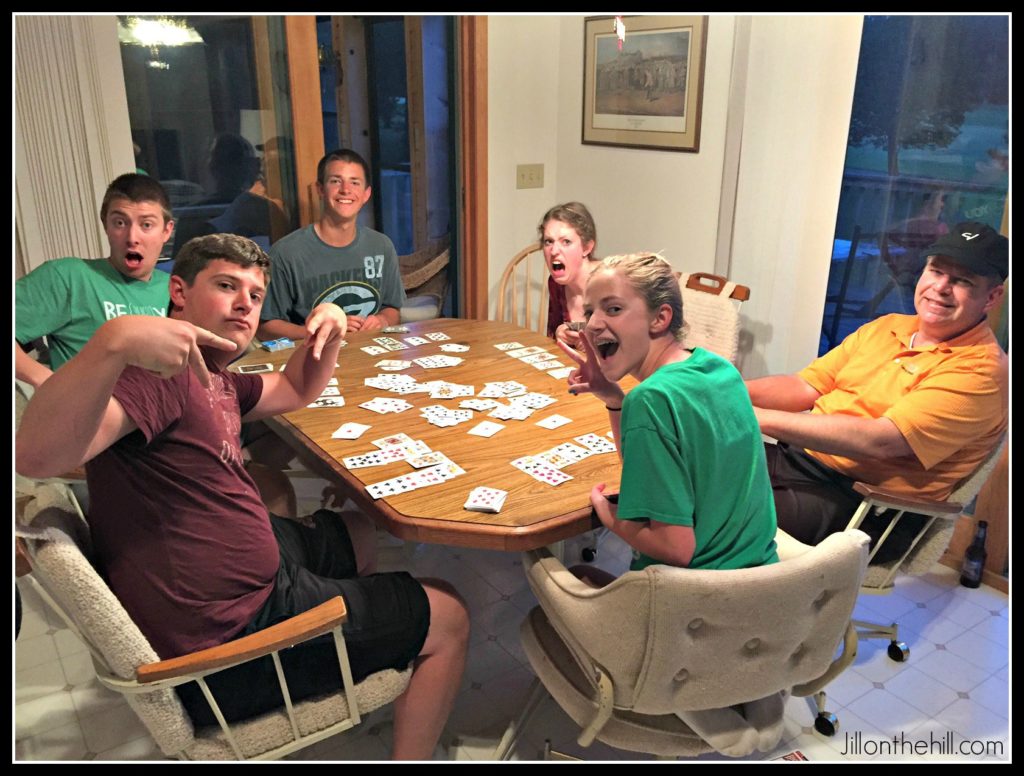 Linking up with Grammietime and the Diary of a Real Housewife. 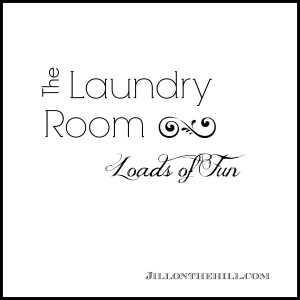 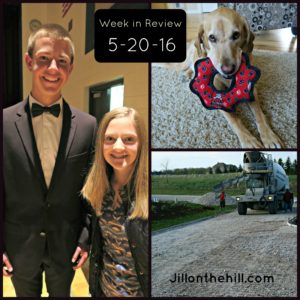 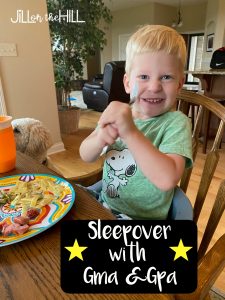 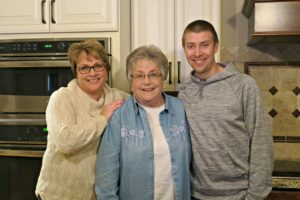